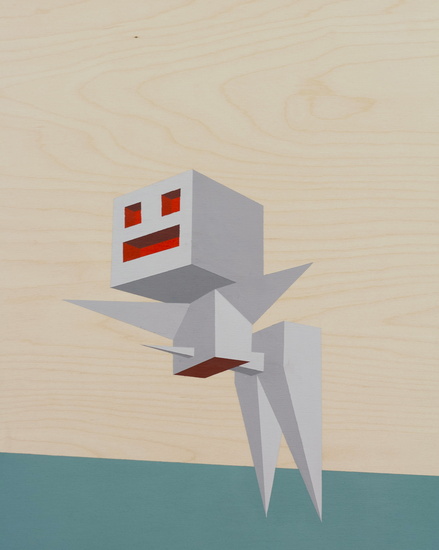 Following Pawel Przewlocki’s larger body of work one can handpick elements that suggest political and social commentaries. However we chose to focus on this recent body of acrylic on wood and panel paintings. Minimal representations of objects and figures frozen within a reduced – seemingly 3 dimensional plane – contorted and often struggling with other objects or themselves. We asked Przewlocki to give us a bit of insight about this series.

My acrylic paintings on wood panel begin in a setting where subtle landscapes are occupied by solitary subjects that are both figurative and architectural. I intentionally try to merge the two so as to leave the viewer uncertain of what is being represented. This is not an attempt at optical trickery but rather a decision made to place the subject matter and the viewer on a precipice between two possibilities. This of course happens less with the smaller works that are clearly figurative. The larger works tend to point at architecture more and that merger becomes evident when the size of the canvas is comparable to the actual size of a human body. That’s when the viewers relation to the artwork becomes a visceral experience.

Some pieces suggest specific narratives more than others but the entire catalogue deals with the disconnect created when formal aspects of the work disagree with the concepts they represent. For example, a number of the pieces clearly represent a figure in some kind of physical discomfort or inconvenience. The more recent work Trouble in paradise is even more aggressive referencing auto-fellatio resulting in injury and possibly death. The disconnect I speak of happens when these topics (often regarded as taboo) are illustrated using playful colors with simple shapes. The figures doing these sordid acts resemble children’s toys or even classic video game aesthetics and therefore visually distance themselves from what’s really happening.

I find this creates a kind of balance, like an argument. When two people disagree with each other they are often unaware of the fact that they have created their own little antagonistic harmony between each other. That’s how I feel about these acrylic paintings.

As for the paintings that are more obscure where sometimes I even omit the figure, these function as invitations to a place where little is suggested therefore a much more diverse interpretation can occur. This ambiguity doesn’t mean I’m avoiding responsibility for my pieces’ concepts but merely an offering where I ask the viewer to share my own questions and concerns about painting. Which leads to the bigger question: What does it mean to make something that’s supposed to be hung on a wall, looked at, potentially sold and then interpreted and judged?